If you are a tourist coming to Bulgaria, or simply religious Christian, the Rila monastery should be a must in your visiting list. Not only because of it’s religious meaning or because of it being cherished architectural and historical monument that is included in UNESCO’s World Heritage list, but because of the spirit of another World and time that can be felt there.

The Rila monastery (St. Ivan Rilsky monastery) has been build in the period between 927 and 941, but unfortunately the only original structure that stays untouched today is a tower (Hrelyo’s tower) built in 1335 which was built for the purposes of defending the monastery and often used during the Ottoman rule in Bulgaria that lasted nearly 500 years.

Ever since its creation, the Rila Monastery has been supported and respected by the Bulgarian rulers. Large donations were made by almost every king of the Second Bulgarian Empire up until the Ottoman Conquest, making the monastery a cultural and spiritual center of Bulgarian national consciousness that reached its highest point in the period from the 12th to the 14th century.

The Rila Monastery was re-erected at its present place by Hrelyu, a feudal lord during the first half of the 14th century.

However, the arrival of the Ottomans in the end of the 14th century was followed by numerous raids and a destruction of the monastery in the middle of the 15th century.

In the years after it was built in its current location, the monastery has been robbed multiple times both by Ottoman soldiers and simply felons, and entirely burnt down on January 12th 1833, where the only building that survived was Hrelyo’s tower. 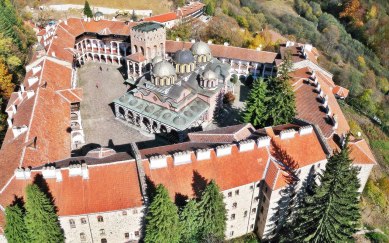 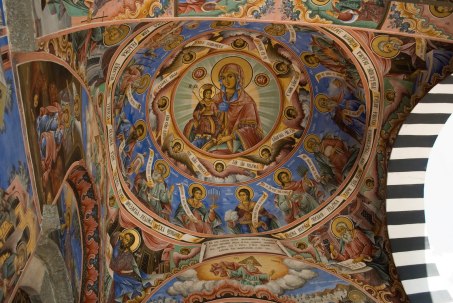 Even during the Ottoman rule the monastery stays literal and educational center of Bulgaria and gives shelter to many of the most famous Bulgarian revolutionaries:  Vasil Levski, Gotse Delchev, Peyo Yavorov and others.

24 meter high stone wall surrounds the monastery to this day with only two entrances through large gates. Once you are on the inside there are three main buildings – the Main church, the Residential part (where monks live) and the monastery Museum, that is a home to countless treasures preserved throughout the years and of course the completely preserved Hrelyo’s tower.

As much I would like to give more historical and architectural information here, I am incapable of doing so, because the history of this place is so rich, one would have to study for days in order to learn even small portion of this magnificent place’s history and meaning.

One interesting thing I would like to mention here is St. Ivan Rilski’s cave. This is a place where the founder of the monastery has lived for over 7 years about 30 minute walk away from the actual monastery complex.

The story goes that whomever manages to pass through the hole at the end of this cave will be forgiven of his/her sins. I have been to this cave, which is strangely not a location that many people know of, and I did go through the hole at the end, and this is something that I would recommend to anyone who has not been there. The feeling of entering this cave and exiting through the whole in between rocks, where your mind tells you that there is no way you can possibly fit. I cannot describe it. Please do it.

Once you are out you will see a stone fountain built into the rocks. Legend has it that if you manage to exit the cave and reach the fountain, you can write a wish on a piece of paper and stick it between the rocks by the fountain, and your wish will come true.

And if all this didn’t make you want to visit this place, then think of the wonderful mountain crystal clear air, the magnificent smell of trees and the feel of another time, long gone, but preserved here.

Hi Everyone, I am Kristina and I am 29 years old. Ever since I was a little girl, I loved everything creative. I would play the piano, draw, paint, cook various dishes and adore DIYs. This is where I want to share all this with you. For me creativity isn't simply a project, it is a way of life, it's a vent that helps me whenever I am stressed, sad or worried, and makes me even happier when I feel everything is OK. I feel like, when we enter adulthood we lose something really important - the ability to be carefree, to be happy about the small things. Creating art in all shapes and forms helps me preserve my carefree spirit and enjoy my life, with all its pros and cons. I am happy to share what I do with you, and I hope you will stay for a cup of coffee. ;) View all posts by Kristina